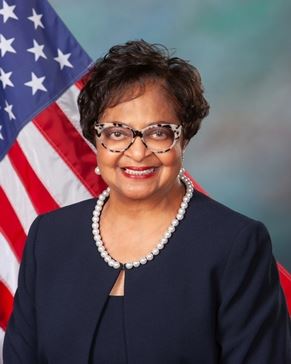 Honorable Curtistene Smith McCowan was elected the 21st Mayor of DeSoto on May 7, 2016 – the first woman to hold the office. She was re-elected to serve her second term as Mayor on May 4, 2019. Curtistene S. McCowan has served on the DeSoto City Council since May, 2012, serving as Mayor Pro Tem from 2014 to 2016; during this same time period, she chaired the Audit and Finance Committee.  Prior to winning a seat on the City Council, she served five years on the DeSoto Economic Development Corporation Board of Directors, where she held the positions of Internal Audit Chair, Vice President and served four years as President.

Mayor McCowan currently serves on the Executive Boards of the North Central Texas Council of Governments, the Regional Transportation Council, the Dallas County Regional Transportation Management Association, Best Southwest Partnership and the Dallas Regional Mobility Coalition.  In addition, she serves as Chair of the Advisory Board for Methodist Charlton Medical Center and is a member of the Planning Committee for Methodist Health System, Dallas, Texas and the Board of Directors for the African American Education Archives and History Program. A founder of Concerned DeSoto Citizens (CDC) -- a 501 (c)(3) non-profit community service organization, McCowan has served as president and in numerous other leadership roles since the organization was chartered in 1989.  She is a past member of the City of DeSoto’s Charter Review Committee, the Dallas County Grand Jury and a proud graduate of Leadership Southwest Class of 2015

Mayor McCowan has made significant contributions to the advancement of education at the local, state and national levels. From October, 2007 until May, 2015, she served on the Texas Southern University (TSU) Board of Regents.  The first African-American elected to public office in DeSoto, when she won a seat on the DeSoto ISD Board of Trustees in 1990, she served two three-year terms as a School Board Trustee -- two of those years as President.  In 2000, Ms. McCowan was elected as the Charter President of the DeSoto ISD Education Foundation Board of Directors and has served on the Executive Committee since 2001.  In honor of her 30+ years of volunteer service, in 2007, DeSoto ISD named and dedicated the “Curtistene S. McCowan Middle School” and in 2018, she was inducted into the district's "Hall of Honor".  She is the recipient of numerous other awards and honors including the Texas Legislative Black Caucus Outstanding Texan Award.

Mayor Curtistene S. McCowan holds a Bachelor’s Degree in Business Administration from Dallas Baptist University and an Associates Degree in Business Management from El Centro College.  She was the Senior Investigator for the Federal Trade Commission’s Southwest Regional Office for over 18 years. After more than 32 years of meritorious service, Ms. McCowan retired from the federal government in 2005.