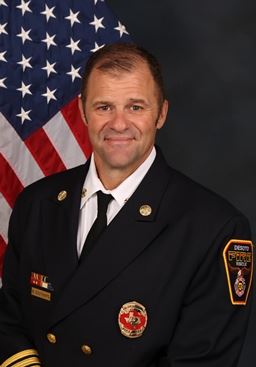 Fire Chief Bryan Southard previously served as the department’s second in command in the title of Assistant Chief since May of 2018.
He joined the department in March 2001, starting as a Firefighter/Paramedic, Engineer, Captain, EMS Battalion Chief, Assistant Fire Chief, and effective March 12, 2022, Fire Chief.

Chief Southard holds a Fire Service Chief Executive Officer Certification from the Texas A&M Engineering Extension Service, Certified Fire Executive and EMS Chiefs Academy Certifications from the Texas Fire Chief’s Academy, and holds numerous other awards and certifications issued during the course of his extensive firefighting career.  He holds a Bachelor of Science for Emergency Management and Public Safety from Grand Canyon University and an Associate’s Degree in Applied Science and Fire Administration from Weatherford College.

Chief Southard has been married for 21 years to his wife Kathryn, an Assistant Principal in the Maypearl School System. They have three children; one who is a firefighter for the Cedar Hill Fire Department.